Foundry Gridnik was developed from the single weight monospaced typeface, originated by Dutch designer Wim Crouwel, for typewriter use in the 1960s, but it was never released. A modifed version of it can still be seen today on Crouwel’s 1976 designs for the low-value postage stamps of the ppt, Dutch post office, which features the stamp value only, displaying the numerals to full effect. Foundry Gridnik’s geometric. Crouwel was affectionately known as ‘Mr Gridnik’ by his contemporaries because of his devotion to grids and systems. This inspired the name Foundry Gridnik for the typeface family. Although based on logic, rationality and with a strict adherence to the grid, it also has a human dimension that sets it apart. To quote Crouwel, “I am a functionalist troubled by aesthetics.” 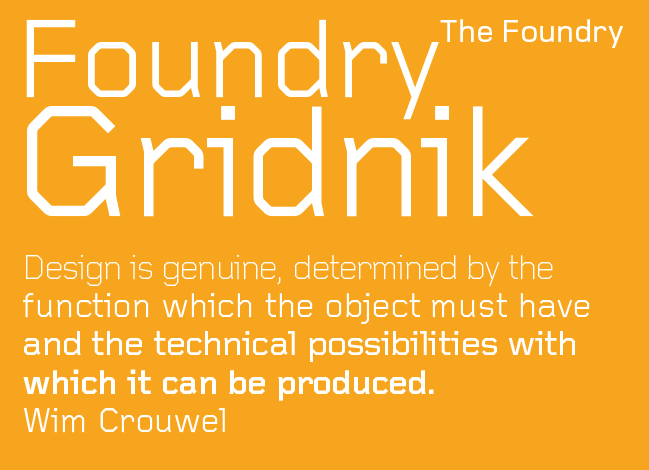 You might find a better price for this font on CreativeMarket, MyFonts, FontBundles, FontSpring or CreativeFabrica
Tags: font Monotype typeface
A font description published on Wednesday, January 15th, 2014 in Fonts, Monotype, The Foundry by Shelly Runyon that has .